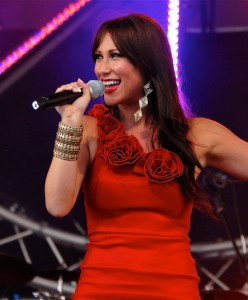 Since deciding to upgrade the band to three girl singers on a permanent basis, Jon Nicholls has been looking for the ‘right’ girl to fit this bill for some time. Marina Berry seems to have come up with the goods in all departments, having been recommended to Jon by ex singer in MIXED FEELINGS and Sky television presenter, Mike Mason..

From backing singing for artists like Peter Andre and The Feeling, to fronting Country band The Springfields and performing at theatres all over the UK, Marina’s singing experience is very varied. She has a solo track on various compilation albums and most recently, Marina’s vocals can be heard on the film Fast Girls which was released in cinemas worldwide in June 2012 and on the soundtrack for a short film on fashion featuring Naomi Campbell which launched in New York recently. Some of her live performances include Nelson Mandela’s Celebrity Dining Event, Celebrity Who Wants to Be a Millionaire & BBC Children In Need. Recently, she recorded a club track as a “featured artist” with European DJ/producer Chris Montana, to be released later this year, and is currently writing new material.

Marina has also worked alongside Lord Andrew Lloyd Webber, when she was chosen as one of 5 girls for a girl band put together for a TV show.

Aside from the singing, Marina is also a TV presenter and currently freelances on shopping channels Bid TV, Price Drop TV & Speed Auction TV, where she is also a trained Producer. She occasionally models, most recently modelling for ASOS and a Brides catalogue, and has appeared as a fighting WAG in The Bill!

Marina has a great personality and has added a glamorous new dimension to MIXED FEELINGS, where she says she is having, ‘a great time!’

She lives in Hertfordshire.